As I start with the final installment of this series, it’s been a relief to finally take the time to get these thoughts from my head (and heart) and into my blog…and ultimately, you. As with each Part, I’m going to paint you a picture based on reality and share what I believe is the safest response. It’s up to you  if you agree with and embrace it or disagree and ignore it.

Needless to say, riding with a cyclist mentality is a good thing; it’s when we stay SO focused on just ourselves, is when potentially dangerous scenarios can present themselves. A recent group ride serves as my final ‘scenario’ in this series and I know that you’ll immediately relate…as you continue to read on.

ITS ALL ABOUT ME MENTALITY Visualize yourself in the middle of a group ride. You are flying down the road and life seems great…for the moment. After many miles of no turns, no traffic lights, no stop signs, or in other words, no interruptions, your group comes up to an intersection where a right turn is on tap. As I mentioned in Part I, way too many cyclists ride with the “follow the leader” type mentality, so whatever the guys at the front do, is typically what everyone else behind them does. With this mentality, your group slows down for the upcoming turn. Instead of those at the front coming to a complete stop, they look to the left at all the traffic coming and realize there’s plenty of room for themselves to dart out…so they don’t lose all their momentum. Hey, I get it. It’s like flying down a long descent, only to find an intersection at the bottom….and the light just turned red. That sucks on timing and I hate to lose all that momentum just like many of you.

However, in this real-life scenario, the actions of those at the front, created immediate confusion for everyone and opened up the door for some potential rear-end bicycle collisions, too. Let me break down all the potential scenarios:

1. because those at the front of the group never came to a complete stop…or communicated anything to the group, everyone behind them was under the impression the whole group could go, too. And, that’s probably exactly would have happened, except the fact that there were vehicles coming and not enough time or room for the group to follow the leaders. That meant the rest of us had to stop very quickly without running into someone in front of us or around us. Yes, it was a bit crazy all the sudden.

2. from the vehicles approaching from our left, can you imagine what it was like for them? That motorist up front, probably thought the rest of us were gong to jump out in front of them, just like the guys at the front did, so it’s no surprise that I saw them abruptly slow down. That creates the next ripple affect.

3. Yes, the motorist did slow down, but they now have two options they can do next. They could have  continued to slow down (and or stop) and give us the ability to all pull out together in from of them, but then you have to think about that vehicle behind him, who couldn’t see what the motorist in front of him saw, and all the sudden that vehicle suddenly slows down when they are nowhere near an intersection. You see, it’s not just about the guy up front driving, but it also affects everyone behind them, or

4. they could get right back on the gas and return to their previous speed….which would have been well within their right. So, what did they do? To me, it looked like they hesitated to speed back up, wondering if anyone else from the group would dart out in front of them. When I yelled out “stopping”, it became obvious to that motorist the rest of us were staying put. Then, I saw that car speed back up.

Can you see all these different scenarios playing out? If you ride long enough, you most certainly will…if you haven’t already. This is a perfect example that there is almost no scenario where our individual actions doesn’t affect others, and in most cases, it’s negative. 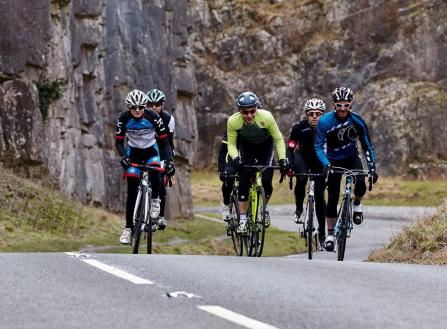 KEEP YOUR ANTENNA UP
So, what should this scenario teach us? Unfortunately, I’ve known and currently know some cyclists who, if they are on the front, will pull out in front of oncoming traffic as long as there is enough room for THEM. They could care less about all of us behind them. Not only are they not riding with a cyclist mentality but they most certainly are no where near a motorist mentality, either. It’s an ALL ABOUT ME mentality. To me, that’s a dangerous cyclist. Any time I’m riding in a group with any of these guys at the front, my antenna is on high alert. I automatically prepare myself to come to a stop. I don’t trust them. If you know of any offenders like these, I certainly hope you don’t disregard them or what the scenario is when they are on the front. After all, it’s ONLY your safety at stake.

As I close this series, my hope is that you’ve come to see having just one perspective while riding, may not be the best, or the safest. I hope it’s beginning to work it’s way from my blog and into your head when riding your bicycle. We don’t have air bags. We aren’t surrounded by thousands of pounds of steel. We don’t have seat belts. All we have is lycra and a helmet…